Zambian President Edgar Lungu has “a heart for aquaculture”, Maxas Ng’onga, chairperson of Zambia’s National Assembly Committee on Agriculture, Land and Natural Resources, told fish farmers during a recent visit by nine members of parliament to Nsombo, Luwingu District in the Northern Province.

The visit was hosted by Musika, WorldFish’s partner in the Norad-funded FISH project Aquaculture Technical, Vocational and Entrepreneurship Training for Improved Private Sector and Smallholder Skills (AQ TEVET), and enabled the delegation to interact with fish farmers.

Committee members are appointed by the parliamentary speaker to oversee agricultural, fisheries, land, natural resources and related activities and to make appropriate recommendations to the government. The committee also plays a key role in shaping and amending agriculture-related policies, legislation and bills.

In Nsombo, the delegation met over 230 women and men farmers, including 32-year-old Seggie Nsombo. “Before WorldFish began their research activities in this area, we only had about five fish farmers, including me,” he said. “Fish farming was never an activity that the people of Nsombo considered – it was mostly maize, cassava and groundnuts – but after they saw how well we were performing, they also started keeping fish. Now we have about 300-plus fish farmers.”

Seggie was one of the lead farmers who worked with WorldFish and partners to test a decentralized fish seed distribution model in 2017, aimed at increasing farmers’ access to higher quality seed. As a result of this intervention, fish farming is now Seggie’s main livelihood. 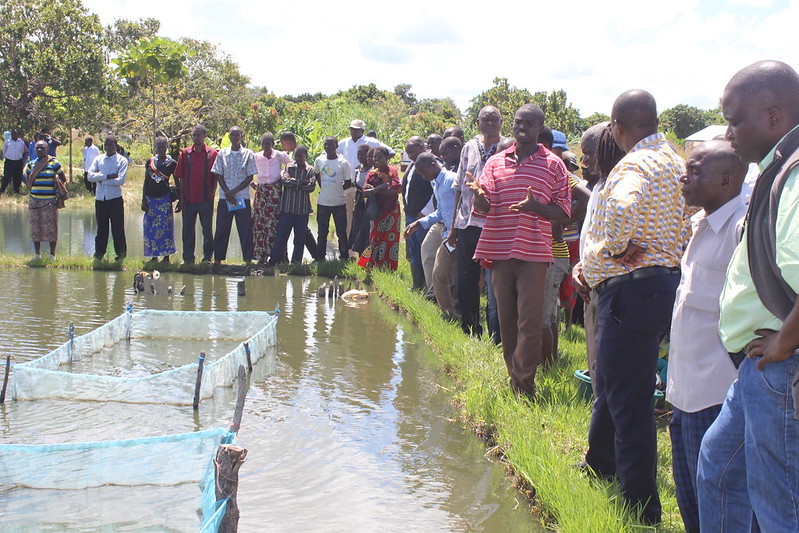 The farmers discussed with the delegation some of the challenges they face, listing a lack of quality inputs such as seed, feed, training and output markets as the main constraints to aquaculture growth. The demand for seed far outstrips the local supply, they said.

The AQ TEVET project is designed to address several of these constraints by enhancing the linkages between the private sector and smallholder commercial fish farmers, improving their ability to organize for better input supply and aggregation and sale of their outputs as well as greater participation in other aquaculture value chain activities.

The second component of the project aims to upgrade the current fisheries science curriculum and training tools, providing young men and women interested in aquaculture with skills that are relevant to the employment market, particularly the private sector.

The government’s interest in promoting aquaculture, which it sees as an important means to improve the country’s economic status, has increased considerably in recent years. In late 2016 and early 2017, the president established a number of ponds at the State Lodge in the capital Lusaka. He subsequently hosted over 2500 fingerlings in the ponds to encourage other Zambians to take up aquaculture, including on a small scale. 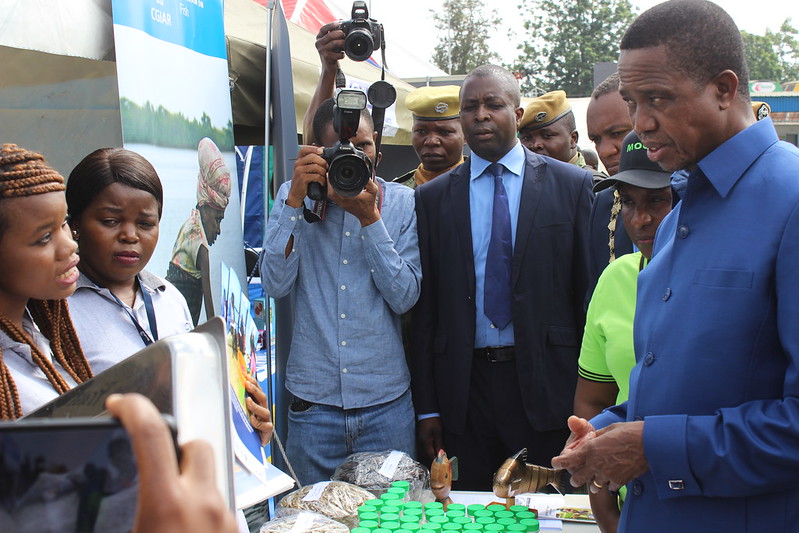 President Lungu commended WorldFish and its partners after learning about the AQ TEVET project when he visited the WorldFish booth during International Women’s Day celebrations in Lusaka on 8 March 2019. He noted that the project’s strategy in combination with the potential of aquaculture could add significantly to the sector’s sustainable growth.