Women in fisheries and aquaculture to dominate in Japan

WorldFish’s Yumiko Kura and former Director General Meryl Williams are among the speakers scheduled to present at the JIRCAS symposium in Tokyo this week.

Organized annually by the Japan International Research Center for Agricultural Sciences (JIRCAS), the event – ‘Women in Fisheries: Sustainable Development Goals (SDGs) and Contributions to Research and Industry’ – will for the first time feature an all-women lineup of speakers.

JIRCAS has played a central role in putting Japan at the forefront of scientific research and collaboration in the field of agriculture, forestry and fisheries. Through various joint research programs in developing regions, it has also served to promote gender equality.

This year’s symposium invites women administrators and scientists to share their research and views on the need for the active participation, involvement and leadership of women in fisheries and aquaculture to achieve the SDGs. 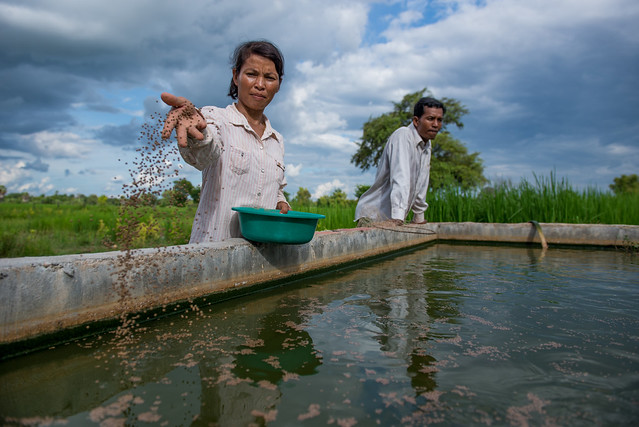 Following her will be Dr. Meryl Williams, Chair of the Asian Fisheries Society's Gender in Aquaculture and Fisheries Section and WorldFish Director General from 1994 to 2004. She will give a keynote speech on women's contributions to fisheries and aquaculture in developing areas, and the present achievements of and future prospects for women researchers and administrators.

“Women in fisheries and aquaculture have few formal rights and little voice and are simply not counted in most official statistics,” Williams says. “Labor statistics for the postharvest and support sectors, where women are more numerous than in direct fish production, are not available or connected, leaving uncertainty over women's contributions. Yet many small studies have shown that women already make great contributions and, given the right policies and support, can make a transformative difference.

She adds: “What's needed are sex-disaggregated data from catch to consumer, at least a hundredfold increase in project and research support for improving gender equality, turning more women into entrepreneurs and giving them a genuine place in decision-making. This will mean not only comprehending the local and specific conditions but also the overarching political and economic structures that govern opportunities.”

In the first session, Yumiko Kura, WorldFish Cambodia Country Director, will discuss the contribution of fisheries in achieving the SDGs from the perspective of women researchers. Using examples from projects led by WorldFish or FISH in Cambodia, Bangladesh, Solomon Islands and Zambia, Kura will underline the importance of fish for livelihoods, gender equality and employment (SDGs 1, 5 and 8 respectively) and the role of women in food security (SDG 2), both through their work in fisheries and, in many places, responsibility for household consumption.

“For the field of fisheries science to become relevant to the SDGs, researchers need to move out of the comfort zones of their own individual expertise and space where they operate. Both male and female fisheries researchers need to build the skills and knowledge to apply gender-transformative approaches to their work to ensure that research outcomes extend beyond fish production increases, which don’t necessarily lead to nutritional outcomes without the involvement of women.”

Women supporting the growth of aquaculture

During the afternoon session, Bonnie Waycott, a freelance writer, will introduce the Women in Aquaculture series. The series was initiated by The Fish Site, a UK-based aquaculture news and information site, to spotlight leading women in global aquaculture and encourage more women to join the sector. So far, 50 women have been profiled.

“I'm really excited to be taking the Women in Aquaculture series to Tokyo,” says Waycott, who interviewed WorldFish Zambia’s Dr. Mary Lundeba earlier in the year. “It's a fantastic indicator of how many women are supporting the growth of aquaculture today and how diverse their roles are. I'm looking forward to hearing what the audience thinks about it, and what we can learn from similar efforts that are underway in Japan.”