Research by FISH and partners shows that farming rice and fish together can increase rice yields, double profits and boost consumption of fish by poor households, providing a means to reduce poverty and achieve national nutrition targets.

In Papat village in rural Myanmar, the rice field of Kyi Kyi Than and her husband Aung Kyaw looks the same as those of their neighbors, except for one difference: they grow fish as well.

“I don’t need to buy vegetables and fish any longer, because I grow my own vegetables. And if my family wants to eat fish, I just go and get the fish from the farm,” says Kyi Kyi Than of their integrated rice field and fish pond.

“Before, if we had to buy the vegetables and fish in the market, we would only eat it ten times per month. But now our six-person family can eat them more than 20 times per month.” 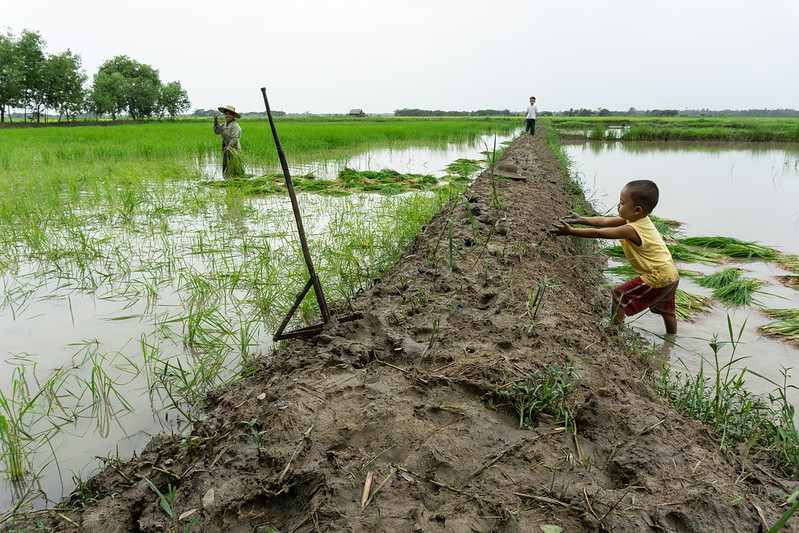 Aung Kyaw and Kyi Kyi Than began rice-fish farming as part of the Development of Rice Fish Systems in the Ayeyarwady Delta research project (2017–2021) funded by the Australian Centre for International Agricultural Research (ACIAR).

The project, which follows on from an ACIAR-funded small-scale rice-fish pilot in 2016, aims to develop and implement diversified and productive rice-fish systems in the Ayeyarwady Delta.

The Ayeyarwady Delta is a priority fish production area in Myanmar because of the thousands of waterbodies and river systems connected to floodplain fisheries.

The research is led by FISH in collaboration with the International Rice Research Institute (IRRI) and Myanmar Ministry of Agriculture, Livestock and Irrigation (MoALI). Parallel work on water availability is sponsored by the International Water Management Institute (IWMI), a FISH managing partner.

Supporting the transformation of paddy to pond

In Myanmar, rice farming covers approximately 8 million hectares (ha) and involves more than 5 million households, most of them in rural areas. Since  Myanmar's independence from the United Kingdom in 1948, successive governments have focused on achieving rice self-sufficiency.

This has led to strict agricultural policies that discourage farmers from integrating other crops into their rice fields or converting a proportion for fish farming. To do so, they have to get permission from MoALI, which is typically reluctant to allow the transformation of paddy to pond.

“Rice-fish systems are not new in Southeast Asia—it is something that has been ongoing for millennia. However, in Myanmar the concept of more formalized rice-fish production in rice plots is relatively new,” says Michael Akester, Project Leader and Country Director of WorldFish Myanmar.

A rice-fish system is a rice field with a fish refuge area (between 10 and 15 percent of the total plot size) with water ten times the depth of the rice-growing zone (1.5 meters versus 0.15 meters). Fish fingerlings, often rohu carp and silver barb, are added to the refuge area. In addition, wild fish are encouraged and many of these are self-recruiting species that breed in the rice-field environment. Here, both stocked and wild fish grow bigger. The wild fish breed and establish a small rice-fish ecosystem. The fish swim into the rice production area, eat pests and fertilize the soil with their feces. 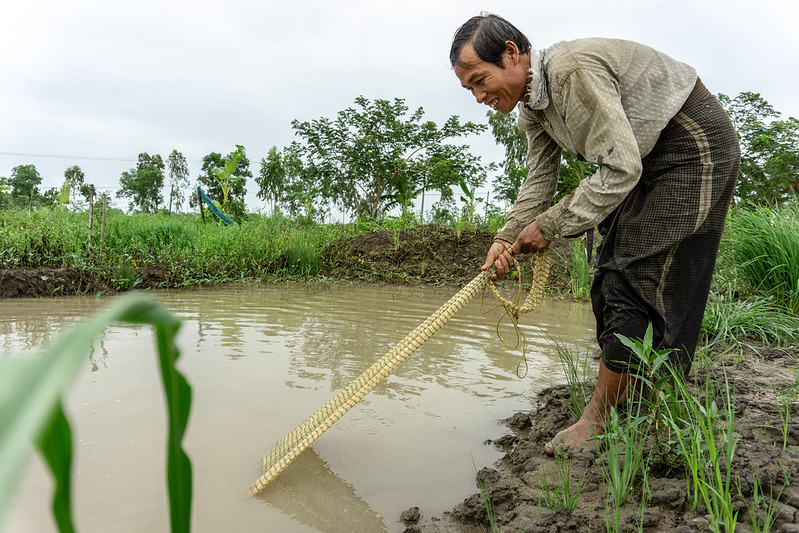 “The concern for the Myanmar Government is that rice yields will be lost if large areas are transformed into water,” Akester says. “But our research shows that rice yield in integrated systems might even increase.”

Recognizing these benefits, MoALI Minister Dr. Aung Thut instructed the director generals of MoALI departments to promote rice-fish systems as part of the Naypitaw Agreement developed after the rice-fish symposium hosted by the project in August 2018.

“Capture fisheries are in decline and aquaculture is becoming more important daily to help provide fish to a population that derives over 60 percent of its animal protein from fish,” said Dr. Thut at the symposium.

Recently, the Myanmar Government approved the Agricultural Development Strategy (ADS), which aims to modernize the agriculture sector. Article 42 states that ‘rather than an excessive focus on rice, there is a need to think in terms of rice-based farming systems that will encompass a range of non-paddy options depending on location’.

To realize its vision, the ADS calls for greater inter-departmental cooperation within MoALI.

“This project will be able to demonstrate to the irrigation and land use departments that there is an urgent need to enact article 42,” says Akester, noting that the project has also encouraged relationships with the fisheries, agriculture and agriculture research departments within MoALI.

“We hope to see policy changes that enable more people to adopt rice-fish farming without fearing that they’re breaking the law. This would contribute to the government’s overarching policy goals of poverty reduction, addressing undernutrition and rural development.” 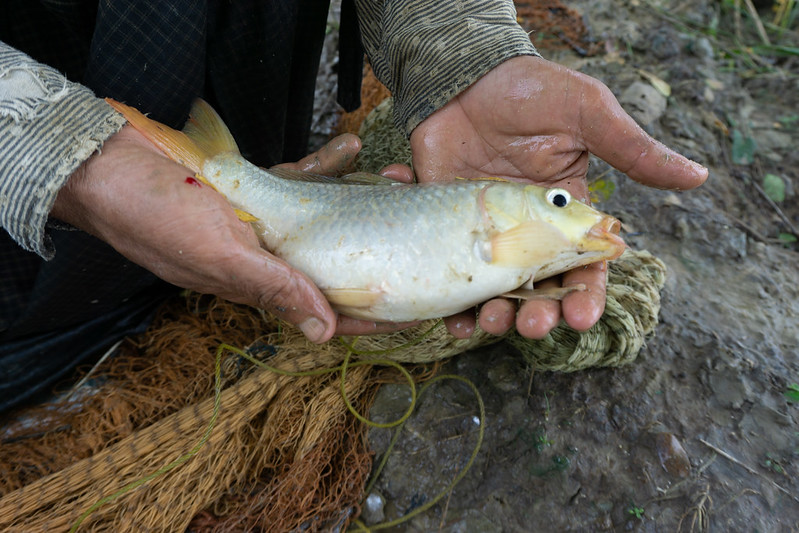 Fish as a source of vital micronutrients

Myanmar has some of the highest rates of undernutrition or malnutrition in Southeast Asia. This takes different forms, such as stunting and micronutrient deficiencies.

“If there are not enough micronutrients while the fetus and the child is developing, it can lead to ongoing diseases and have lasting effects for the rest of that child’s life. That’s why fish is important, because it contains both protein and vital micronutrients,” she explains. 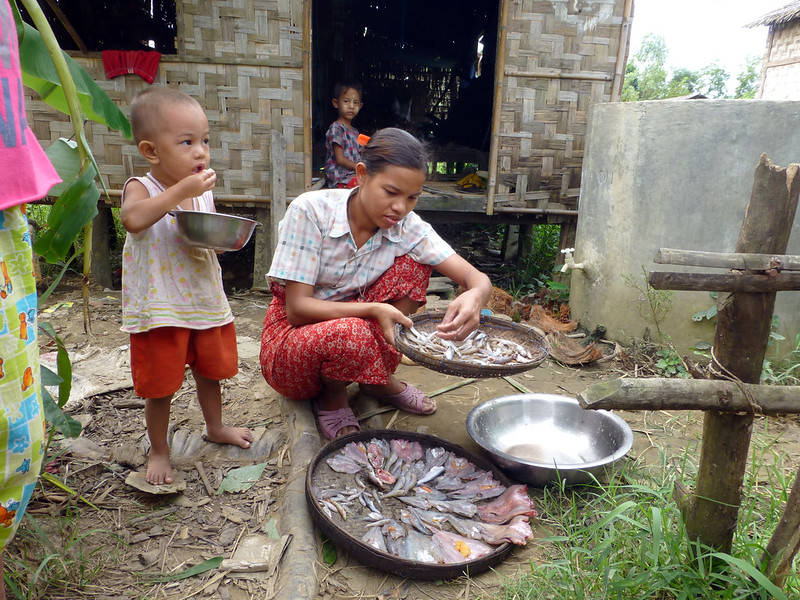 Another benefit is that small but highly nutritious wild fish species, for example mola, find their way into the rice-fish systems from neighboring habitats. When eaten whole, mola are an excellent source of micronutrients such as vitamin A, iron, zinc, calcium and vitamin B12 as well as fatty acids and animal protein.

“Now we always have fish for our family,” says Kyi Kyi Than, adding that her family’s consumption of fish has doubled.

“I hope it will become easier to get permission to develop rice-fish systems,” says Aung Kyaw. “I think that almost all farmers in my community would practice and adopt this kind of fruitful system.”